Our website is primarily on genealogy of Beruwela families and on related historical and current events.

Those of you, who wish to patronise, may post and share news and information on their family personalities, cultural events, traditional etiquettes and current matters. Images, video clips and anecdotes of interest and relevance will also be much appreciated. These will be posted in a balanced manner, so that equal opportunity is afforded.

“Wairooshi” is the family name of late Mr O.L.M.Raphaie( Raffai). He was born in 1904 in Beruwela and was a leading, wealthy gem merchant from China Fort (Deenagoda), Beruwela. He has been rightly placed on record as “Wairooshi”, even in the Hansard of the Parliament of Sri Lanka (Page C 1364 dated 4 th May 1999 – Volume 122 Number 15).

With regard to the above Hansard reference, I wish to place on record that the incident didn’t happen “when young Bakeer, as a bridegroom, was about to come to bride’s residence”. This part is baseless and hearsay.

The true position was that a discussion took place the day before the wedding, when late Mr A.W.M. Razick Marikar and late Mr S.L.M. Shaffie Marikar ( Cousins of the bridegroom) came to resolve the issue of the “star”, with our father “Wairooshi Mohamed Refai”. Then, the three of us, my eldest brother late M.R.M.Hamza, late Ahamed Sally Mama, my maternal uncle (Ahamma Sally Mama – Shana Munna) and I were the witnesses to the incident.

During this time, the whole compound of our ancestral house (the wedding house) was illuminated with “stars” mounted on decorated posts, giving a jubilant, carnival atmosphere; Mr Razick Marikar and Mr Shaffie Marikar who arrived showed displeasure, as they belonged to another political party and requested that these illuminated “stars” be removed, as the “star” happened to be the symbol of the rival political party candidate Mr Batuwantudawe, whom our father Wairooshi supported. There was no utterance whatsoever by the bridegroom on the matter, as Mr Bakeer Markar was not a party to the above discussion.

The matter was amicably settled and the illuminated “stars” were removed. The next day evening as scheduled, the bridegroom Mr Bakeer Markar arrived “to take the hand” of the great lady, bride Sithy Kadeeja, daughter of “Wairooshi Mohamed Refai”.

However, to the amazement of the bridegroom and the guests, Wairooshi Mohamed Refai made sure that an illuminated star dazzled, fixed to the large wooden trellis work at the bridegroom’s dining hall, at our ancestral home. 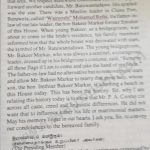 Late Naleem Hadjiar’s speech on the concept and origin of Jamiah Naleemiah Institute in Beruwela. He speaks with foresight and on the inculcation of discipline among the students at Naleemiah campus. He also stresses on the future of Naleemiah.