Note -The letter of late Leader Mohamed Ali Jinnah and the pages of the Ceylon weekly newspaper “Star of Islam” were in the possession of late Mr M.L.M Hassim. At present they are in the custody of Mr Hassim’s son, M.H.M. Hibathulla Hadjiar. The images of those posted here, are forwarded by Hibathulla Hadjiar

It is evident from these documents that the Beruwela Muslims pioneered International Relations, through late Pakistani Leader Mohamed Ali Jinnah (Founder of Pakistan) in 1946.

The pioneering International Relations developed through late Pakistani Leader Mohamed Ali Jinnah and the Muslims of Beruwela, is surely a significant milestone of historical and diplomatic value; as this relationship dates back to the year 1946.

The letter dated 28th May 1946 written by late Leader Mohamed Ali Jinnah bears testimony to this International Relations (Please refer Copy of his letter posted below).

This letter had been addressed to late Mr M.L.M.Hassim, Secretary of Chinafort Muslim Educational Progressive Society, Beruwela. By this letter, the late Leader Mohamed Ali Jinnah acknowledged the receipt of the gift of 70 Ceylon precious stones, on 22nd April 1946, being a gift given for his 70th Birthday, as a token of “kind thought”, by the Muslims of Beruwela. Here, he appreciated the Beruwela Muslims’ sympathy for his strides in the freedom struggle for “the cherished goal – Pakistan”.

But this token of appreciation by the Beruwela Muslims, had not been taken kindly by Sir C.V. Raman, a compatriot, who visited Ceylon, to preside over the 1st Annual Sessions of the Ceylon Association of Science.

As reported on 28th September 1946, in the “The Star of Islam”, a weekly newspaper of Ceylon, Sir Raman took a dig at the Beruwela Muslims. He failed to understand the goodwill of Beruwela Muslims. On Sir Raman’s query, late Mr A.C.A.Wadood, a prominent resident of Beruwela, responded in the same issue of the newspaper, referring to the late Leader Jinnah’s commendable efforts, “It was because of his stupendous struggle for the freedom of India, in a manner that would secure the freedom, not of one section, but of all sections of the people of the sub-continent of India……” 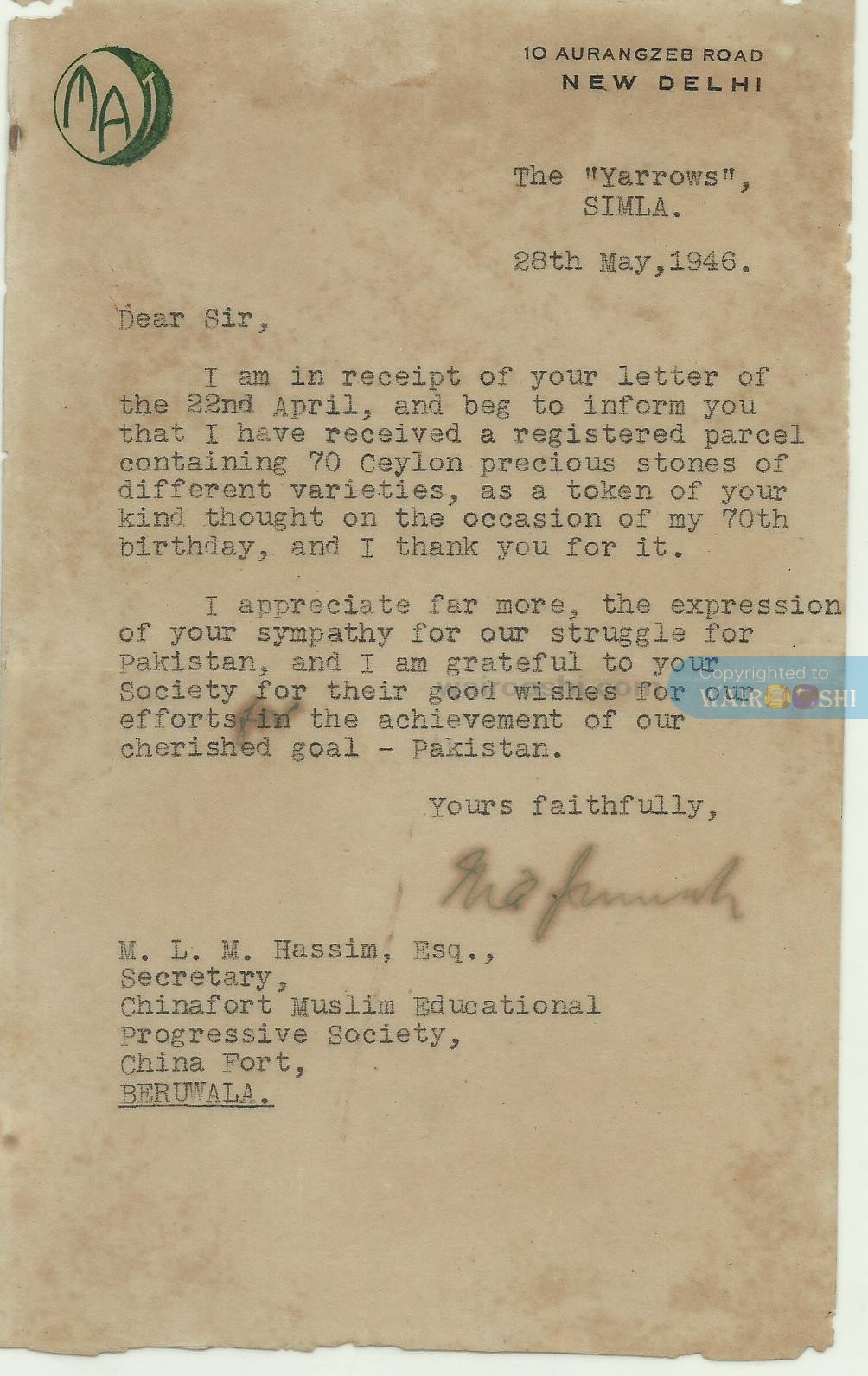 This letter written by Mohamed Ali Jinnah – Founder of Pakistan to MR M.L.M. Hashim of Beruwala is presently in the possession of Mr M.H.M. Hibathulla, son of late Mr Hashim